Jeff and Mikki Martin are no longer associated with CrossFit Inc. or CrossFit Kids. Neither am I.

From July 17 to July 19, 2015, Brand X hosted the second annual Gauntlet Gathering. Forty-four athletes traveled to Ramona from around the world to participate in three days of fun, training, and competition. Parents and coaches and family members accompanied them. Also on hand was a two-day deluge of Biblical proportions that forced some shift-on-the-fly adjustments. We managed that (kudos to Dan Strametz for holding it all together), and the kids took care of the rest.

The kids always take care of the rest. 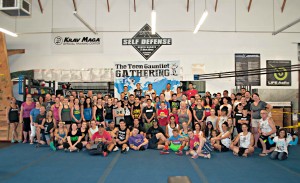 A Movement about Movement
They love to compete, kids. We’ve always known that, and we’ve never wanted to deny them that opportunity. But we managed to touch a nerve here and there when we recommended that children ought not do adult-style fitness competitions. We got earfuls of stuff along the lines of how “my seven-year-old loves to compete every chance she gets and eat the eyeballs out of her opponents’ heads” and we shouldn’t deny her opportunities to learn how the real world works (well, competition generally has rules that participants abide by and you know who your opponents are—the real world can often be a bit of a different game, so I don’t know what a child is actually learning about all of that while plucking eyeballs during her mini-peewee soccer game). To label us anti-competition is to ignore the substance of what we were saying about the impact of imposing adult-style competitive environments on children learning about exercise and fitness. As well as recent history.

In 2011, the Martins organized the Teen Challenge, which took place at what was then the Home Depot Center in Carson during the CrossFit Games, and followed up that October with the first Teen Gauntlet at Brand X. The goal was and still is to provide a safe and fun environment for kids to test themselves. Since then, the Gauntlet has grown into an international fitness competition that takes place at multiple facilities around the world. Hundreds of teens have participated in the last four years. Some of them many times.

Including the Teen Challenge, from 2011 to 2013, the Martins organized three teen competitions at the CrossFit Games (not to 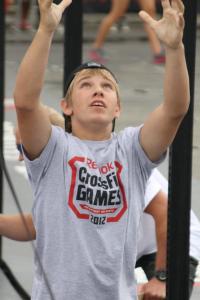 mention comps held at the Arnold and LA Fit Expo). They were always well-received by the 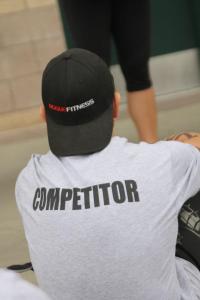 participants, their families and coaches, and thespectators, everyone asking for more, but the Inc. establishment always seemed progressively more underwhelmed. My impression of our events was that they were at best afterthoughts and more likely annoyances to CrossFit Inc., the Games organizers, and Glassman (who I’d heard was not all that fond of the Games and even less so of the idea of kids competing). I’ll spare everyone a list of reasons why I felt this way, but the fact that, in 2013, the CrossFit Kids information tent was stuck out in the parking lot with the t-shirt vendors and snake oil salesmen might be near the top.

So in 2014, rather than wait around until the last minute to find out if we’d once again be shoehorned into the secondary “attractions” schedule at the Games and then have to scurry about to organize a competition, the Martins decided to do something different. While in New Zealand, they spent some time with Henry Heke. Together they hit upon the idea of the Gathering. They envisioned a multiday event that was less US-centric than many other high-profile fitness events, one that would bring together teens and coaches from around the world to  participate in a Gauntlet competition as well as sessions intended to share Brand X training expertise. The goal: get kids and coaches to rethink common understandings about competition, to realize competition’s role  as a training tool and to embrace good movement as a key to high performance and longevity.

In 2014, the Gathering’s sessions focused on basic concepts well-known in CrossFit; this year, we put together four sessions that delved into interrelated ideas at the heart of the Brand X Method™.

The Brand X Method Conversation
Brand X Method coach Keegan Martin spoke on a familiar topic: Mechanics è Consistency è Intensity. Learn the mechanics, execute them well consistently, and then your intensity (speed/load) can increase. If you jump to intensity without perfecting the mechanics, chances are two things will happen: 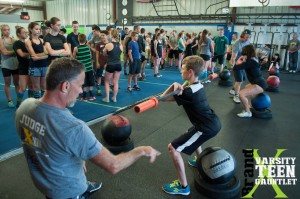 To help the kids connect M-C-I to “competitive fitness,” Keegan depicted the M-C-I idea as a pyramid with intensity at the top and suggested that ignoring mechanics will truncate performance. Keegan also told athletes to think of intensity as the “sport of mechanics.” That is, intensity is the expression of mechanics consistently performed. Higher-quality mechanics mean higher-quality intensity.

Brand X Method co-founder Jeff Martin ran clinics on the front squat and bracing that allowed the athletes to practice correct mechanics andfundamentals of safe and efficient lifting. The front squat was presented as a piece of the clean and the thruster and time was spent on hip mechanics and the rack position with athletes practicing the movement to progressively lower targets. The bracing clinic was devoted to how to neutralize the spine and breathe prior to moving external loads. For many of the athletes, these ideas seemed new, but they were quick on the uptake during the workshops. The goal for the clinics was for kids to receive feedback and then apply what they learned to the thruster/muscle-up and heavy clean workouts.

Last to speak was Strongfit coach Julien Pineau. Jeff met Julien at the USAPL California State Championship back in April. One of the interesting things about Jeff as a coach and gym owner is that he’s never been hampered by petty professional jealousies. When he heard an authoritative voice coaching athletes, Jeff didn’t shy away and insulate himself in resentful insecurities. He gravitated toward this voice and found himself a kindred spirit: a movement coach, albeit one who is operating at a level we are trying to reach. 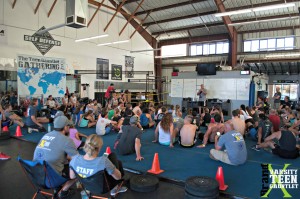 Julien deployed a pyramid much like Keegan’s, stating that the wider the base the higher the peak, meaning the higher one’s performance. The base represents the fundamentals that drive the expression of athleticism and is reminiscent of Gray Cook’s idea that the quality of fundamental movement dictates the quality of sport-specific movement. Julien pursued this line of thought to help the teens understand that, admit it or not, CrossFit has evolved from a training regimen to a sport and as such must be treated like a sport beginning with recognizing the need for specialization as well as an offseason for recovery and corrective work. Ignoring these things can lead to injury. Fellow Strongfit coach Sun followed up with a brief discussion on the place of recovery in training.

Between Keegan, Jeff, and the Strongfit coaches, the athletes, coaches, and parents were subjected to a knowledge carpet bombing. So did the learning portion of the Gathering positively affect the competition portion? 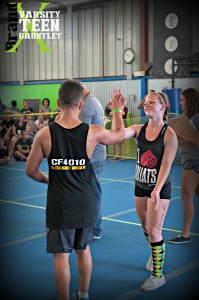 Like I said, the kids took care of the rest. And by the rest, I mean the business at hand. One thing is for sure, the kids always get after it. The effort is always tremendous, their sense of community (one of the few things about CrossFit that remains appealing to me) always on display. And the fun too; from the warrior-like Varsity kids down to the micro-squids participating for the first time, the kids all seemed to have a good time. Fun and fitness, fun and sportsmanship, fun and hard work.

Then what do I mean by not so much? I’ve been saying for a while that true change in youth sports will be difficult. A lot of the problems boil down to habit, and in the realm of competitive fitness, many habits are formed during training. We’ve found that when you treat every training session like a competition, that is, doing the workouts for time or reps, then the kids will learn that the point is to do the work as fast as possible. In such an environment there’s no way to focus on good movement, no way to instill the idea of longevity in sport and physical activity, and I believe it’s a coaching ethos rooted in a never-ending and misapplied quest for IWCABTAMD that fosters that environment.

At the Gathering, when the clock started, the kids shifted into competition mode, which for many of them meant satisfying the standards at lightning speed. Yes, as always there were wonderful displays of work capacity and strength and power, and at this event there was a noticeable lack of egregiously unsafe movement, but I think most of the kids understand fitness competition in terms of adult-style, go-for-broke win-at-all-cost sporty. And I think a focus on that as well as on intensity during training is stifling full athletic expression.

We also have to keep in mind that poor mechanics and attendant instabilities are not always immediately unsafe, but shear forces on joints and muscular imbalances and the body’s hunt for stability when moving inefficiently can lead to problems including catastrophic injury down the road. Successful athletes break all of the time. In CrossFit, baseball, tennis, soccer (even in faux sports like golf and bowling). This reality is a critical driver for the Brand X Teen Gauntlets and the Brand X Training Centers.

As Seth Godin put it, cultural change requires a change in the conversation. Well, frankly, there’s a ton of talk. It’s our expectation that the Gauntlets and Training Centers become hubs where we can begin converting that talk into action.

We’re not simply peddling a name; through our Training Centers, we’re promoting continuing professional development via our seminars and mentoring program and the collective pursuit of best practices by encouraging the ongoing sharing of ideas. If you’re a Brand X Method Training Center it’s because you’re committed to learning and applying the best methods for training safe and efficient movement designed to allow kids to reach their fullest athletic potential now and into the future.

Arriving at a point where we’re actually having a noticeable effect will take time because not everyone is interested in being held to the kind of standards the Brand X Method demands. I think that’s okay; to rush into this is to invite the bastardization of our mission, but when the Training Center network spreads and consolidates we’ll be doing our part to redefine athleticism and competition—the entire youth sports enterprise—for kids and adults in a manner that will promote physical literacy, physical fitness, and physical education throughout the life course.*

Brand X Method Training Centers are taking action. You know what they say about action, right? Speaks louder than words. If we keep at it and people like Julien Pineau and John O’Sullivan and Tom Farrey and organizations like Designed to Move keep at it, we can change the conversation, change the culture, and change people’s lives for the better.

By the way, our next Gauntlet is slated for October 10/11, 2015, at multiple locations around world. And again in the first quarter of 2016 at a time and places to be determined. And, yeah, the 2016 Gathering is happening on July 8-10. In New Zealand. Save the dates.

* Translated for those of you who love fitness competitions, this means fast and heavy as fuck, but also beautiful, safe, and efficient as fuck too. And for as long as fuck. Like way down the road when you’re old as fuck.