Unbullyable™ – How to Train Your Demon – The Brand X Method

Unbullyable™ – How to Train Your Demon

I’m turning 50 this year. That’s my chronological age. I remain forever 13, scatologically speaking (duh). But my athletic mind is convinced that I’m still, I don’t know, about 24. This delusion was a blessing in 2007 when I shuffled through the doors of Brand X and decided to give this CrossFit stuff a try. Thinking I was still somewhere in my twenties meant I was willing to explore stupidity—I mean intensity—with all of the numbnuttedness—I mean boldness—of a young’un. It’s also a curse, because I spent many years allowing my twenty-something athletic mind to beat the shit out of my forty-something body.

Gotta Get Good at CrossFit

It finally occurred to me that, despite what I thought I was doing in the gym in the early years, I was really only focused on becoming a better CrossFitter. But I didn’t even want to be called a CrossFitter much less compete in the so-called sport of CrossFit—I abhor self-labeling and I’m a head case when it comes to individual competition (I su-u-u-u-ck). I mean, why else would anyone want to be better at CrossFit if not to crush souls and FSU in perpetual beast mode?

I see that now, but my fuzzy goals didn’t align with my run-amok actions, which revolved around more reps and faster times, going HAM and getting floored every time I showed up. From where I stood, part of CrossFit’s Kool-Aid charisma was this notion that you would get more reps and faster times if you simply just kept doing CrossFit and were willing to accommodate discomfort. You would become “fit”—ubermensch fit. My early experience leant support to that; I realized some impressive gains. But my early experience was also shrouded in anxiety. About not wanting to “go to the dark place” and about sucking at CrossFit, which I pretty much did—and still do if my 15.1 performance is any indication.

What’re You Really Training For?

In 2011, the first year of the Open, a Facebook group devoted to “masters-level” CrossFitters came into being. My name must’ve been pulled from the Games website and I was asked to join. I never participated much in that forum mostly by virtue of the fact that the vast majority of posts that dribbled through my newsfeed were people’s self-reported injuries, humble-bragging, and deeply annoying angst-ridden introspection. However, I did actually comment a few times here and there, two of which were notable.

My first comment was to a post that imperiously lectured the group about training smart. Training smart. That’s low -hanging fruit. It’s easy to pontificate about that, especially on social media. The assumption is that everyone is training for some concrete purpose and therefore it only makes sense to do so smartly. Sure. But what about those of us who aren’t training for anything? I don’t mean the exercisers, the percentage of people whose CrossFit experience is basically a high-octane version of a traditional gym membership. I mean those of us who hit the gym every day to get a fix (and that’s using the tired workout addiction metaphor). So I tossed my two cents into the thread by suggesting that some of us weren’t so much training as trying to slay an immortal demon within and intelligence had very little to do with that endeavor. Crickets. I mean the comment netted one paltry like. Perhaps I said too much and I’m the only one on the planet who chose working out over, say, a needle to address inner turmoil. Or perhaps some people are full of shit. The point is CrossFit was a fabulous means of slaying my daily demon, but it came at a cost.

A few years back I began to wonder about the impact of such unbridled long-term exposure to high-intensity exercise, especially for older so-called masters athletes. A couple years later my idle supposition was echoed by one of the great CrossFit haters: Mark Rippetoe. For some time he seemed hell-bent on expending prodigious amounts of energy and vitriol on ensuring that the world knew that CrossFit sucked. Then he throttled back and said this. I found it hard to argue with any of his points.

More Than One Way to Skin a Demon

I was beat up and beat down. Overtrained, ragged. I didn’t sleep well, and there were so many aches, pains, and niggles, so much noise in the system, that it was sometimes an epic battle to just follow through on warming up to workout. I was no longer so comfortable with this kind of discomfort. My S was FU’ed.

Then there came a day when Jeff Martin, Brand X Method and CrossFit Kids co-founder, sat me down and gave me a talking to. After many months experimenting on himself, which incidentally is a key component of Brand X Method programming, he concluded that the typical approach in the community was unhealthy for some of us—and us included me and my friend and longtime “training” partner, Dan Strametz. To put it simply, Jeff recommended a shifting of gears and a lane change. There was no need to bury ourselves every week under the guidance of a method that wore the public face of godlike Games athletes and more and more appeared to be the essence of uppity t-shirt slogans; to wit, If your workout doesn’t scare you, it’s not hard enough. FtS.

Jeff framed up a template centered on the Brand X Method training philosophy, which had been evolving away from the “training to become a better CrossFitter” idea for several years now. I don’t know if I ever properly expressed my gratitude to him. I know it made him uncomfortable to sit there and tell me that maybe it was time to cool my engines. I remember stammering as I tried to explain to him why I found his words distressing. That I knew the truth of what he was telling me, but if I didn’t sufficiently wreck my body on a daily basis, I would fail to kill the unkillable lurking in my mental closet. I think he got it. But I got it too. And I did it.

I stopped thinking in terms of CrossFitting, of WOD-ding, of being some kind of superheroic “athlete.” I didn’t need to end up in the fetal position after every workout, sobbing, because I don’t need to be up all night every night because my nervous system is frazzed, my muscles are tender to the touch, and my joints are screaming. I don’t need my wife giving me the “Really?” look anymore with the head tilt and mild scorn in her eyes when I can’t get out of the car because I’m all FaF. I don’t need any of that shit.

My workouts have never been better. By better I don’t mean I’m killing WODs; I mean I move better, more efficiently, safer. I mean I’m in the game for the long haul.

We live too long. I’m convinced that the miracles of modern civilization keep many of us alive beyond our years. The modern medical establishment adds years to people’s lives, but quality doesn’t often seem part of the calculus. Yeah, geriatrics wants us to “age in place,” but it seems like the end result of an extended life span is a slow rot in place.

The Brand X Method acknowledges this possibility and offers an alternative. In changing my programming, I embraced a key pillar of the Brand X Method: longevity. The goal is for us to not just age in place but to “age and play.” To keep us active and capable—to keep us engaged in our lives. And with any luck we’ll simply drop dead when it’s time rather than shambling wretchedly through a shrouded valley of ever-deepening insignificance to gutter out in a miasma of our own filth.

Starting with early exposure for preschool-age children, the Brand X Method delivers a developmentally appropriate physical literacy right through to the masters age. Like I said, I’ll be 50 this year and I’m watching the approach of that moment kind of like you do when you’re coming upon a serious traffic accident. But I’m better prepared to looky-loo the carnage and continue on slaying the demon for years to come.

My workouts now reflect the maturation of the Martin’s program, which began in 2004 when they founded CrossFit Kids. The programming also represents my own maturation. Gone is my “to save the village, we had to destroy it” workout mentality and I’m more concerned about maintaining a realistic level of fitness as I age.

Although that’s about as far as my newfound maturity reaches. I’ll always laugh about poop, but I may not die slowly in a puddle of it. The Brand X Method provides me with a new-fangled way to slaughter the demon and FSU right up until I do expire.

Huh? What was my second notable interaction with the CF Masters group? Another time. 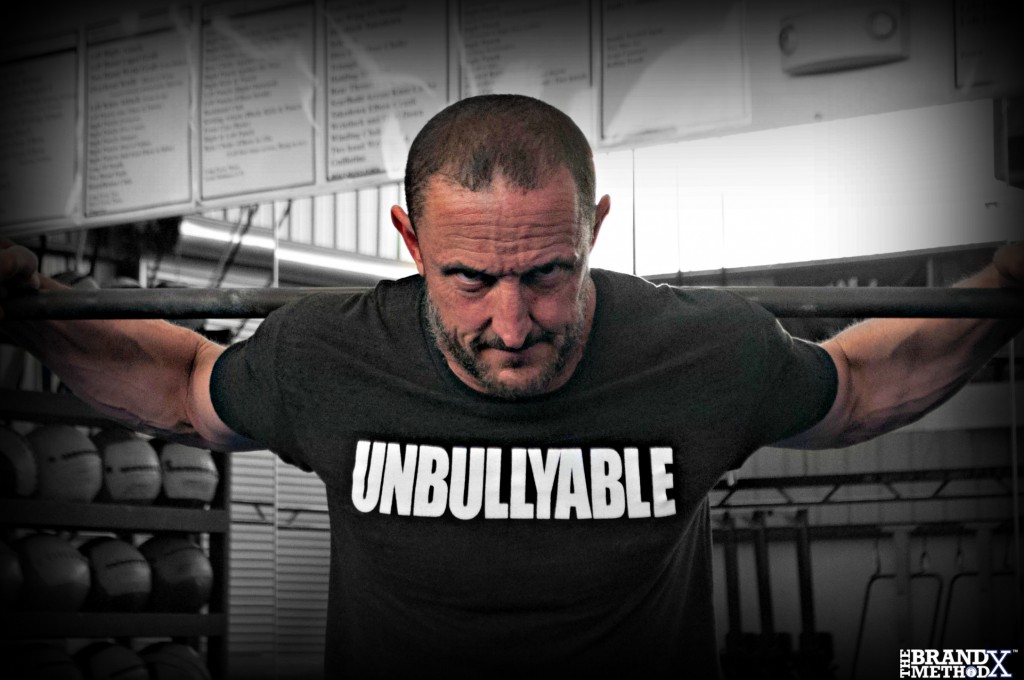