Back in June 2012, the CrossFit Journal published my pretentiously but appropriately titled article, “The Banality of Elitism.” I discussed the professionalization of youth sports and warned about that culture seeping into the CrossFit community. I was already nearly two years into researching so-called long-term athletic development and single-sport specialization while conducting something of an experiment involving my son. I was learning about and experiencing things that journalists and researchers had been writing about for years.

That was two and a half years ago, and people are still warning about these things like no one’s ever seen it before. Someone shares a blog post about the evils of single-sport specialization on social media and it gets all kinds of likes and hearty harrumphs as if some deep hitherto unconsidered insight had been shared. But the reality is that there’s mostly a lot of talk and very little walk happening.

I Be All Prescient and Stuff

It wasn’t long after the article appeared that we began to see increasingly more throwdowns and other adult-style competitive events marketed to children in the CrossFit community. Some of them were everything I cautioned against: go-for-broke competitions with club sport-style age divisions run by people who had no experience training children. We were even bombarded with steaming piles of videos that suggested no concern for athlete safety, good movement, or smart training. Here it was, the ooze from youth sports spattering all over the rim of our community.

Are you thinking I just committed an act of hyperbole? That these kids fitness competitions are certainly not the equivalent of an indiscriminate shotgun poop? Kids love to compete, you say. Kids need to be challenged, you say. These comps provide a place for kids to emulate adult competitive exercisers, are a means of encouraging kids to stay fit, and are an alternative to evil video games.

I understand those sentiments but also understand that unbridled competition and adult-derived challenges for the sake of teaching hard-knocks object lessons are BS. And it doesn’t support the mission of Jeff and Mikki Martin, founders of CrossFit Kids and the Brand X Method.

In “Banality,” I also discussed the Teen Gauntlet, the brainchild of the Martins who beta tested the idea at the 2011 CrossFit Games in the form of the Teen Challenge. At the time, Jeff and Mikki felt that it was not just within their purview but also their obligation to take the lead on defining what constituted smart youth fitness competitions, given the increasing role of the Games as representative of CrossFit to the mainstream and the increasing scrutiny CrossFit was receiving for purported injuries.

The Brand X Teen Gauntlet has evolved and continues to evolve into an expression of what the Martins view as best practices when it comes to not only youth fitness competitions but youth sports competitions in general. That’s fairly bold, but the Gauntlet articulates the spirit of the Brand X Method’s mission, which is to do what is best for children:

I find something… how do you say… WTF-y about the president of Little League standing in front of an audience of adult stakeholders* and claiming that focusing less on winning will help to revitalize our troubled rec leagues when his organization’s annual World Series is arguably the archetype for and the epitome of youth sports professionalization and commercialization.

It’s easy and politically correct and utterly lame to spew ooey-gooey platitudes about how to fix youth sports, about how winning isn’t important, about how it’s all for the kids, about how it ought to be fun. These banalities fade into the social media white noise along with all of those facile inspirational fiats and look-at-me-you-suck photos of perfect family moments. They do nothing to teach young athletes the actual valuable lessons those empty words could impart if they weren’t, well, so empty.

As adults, we’re in a position to define the entire youth sports experience for our children, including the purpose and value of competition. But action must be taken. Actual action, not just talk. Actually doing what’s best for kids down in the trenches of the fields, pitches, and courts. What would happen if Little League actually took a step toward shifting the focus away from winning by no longer televising its World Series? I mean aside from the loss of millions in revenue. Might we see less of this sorry crap? I don’t know. I do know that truly changing the game is gonna be tough.

Now there’s a Reebok CrossFit Games Open Teen Division. Teens have always been allowed to participate in the Open, but this year they get their own leaderboard and a chance to be crowned the “fittest teen.” The timing of this marketing expansion is curious, to say the least. But whatever, should be fun being so much like the adult Open, right? There are two age divisions (14-15 and 16-17) with prescribed and scaled workout options, and “teens will perform a different version of the Open workout than the adult male and female competitors.”

We’ll see how this plays out over the next few weeks, but so far the chief difference between the adults and teens is the weight scaling, which at first blush might seem an obvious element to scale. However, within the teen division, the two age brackets have been required to perform the workouts at the same weight scaling, making me wonder about the purpose of those brackets. It’s possible I didn’t follow the intricacies of this explanation of adolescent maturational differences, but from my experience there can be a large gap between the capacities of a 17-year-old and a 14-year-old not measurable chronologically and worth respecting in terms of how workouts are scaled when such potential performance differentials exist.

And before anyone tries to counter this statement by telling me that their 14-year-old can [insert grand exercise achievement] as well as an adult, please just stop.

Maybe I missed it, but I found nothing in the rulebook in way of guidelines for teen athlete safety. Presumably, and in keeping with the spirit of libertarianism, safety is the responsibility of the participants. And, after all, this is the Open. It’s gotta be the largest sporting event in human history, and it doesn’t allow for fear or excuses or whining. Grit, guts, tenacity, perseverance. Pick your sports shoe ad buzzword; that’s the give-no-quarter stuff of CrossFit. Don’t get me wrong, fortitude and determination are noble traits for sure. When rationally expressed; but teens are not always the most rational people, especially in a competitive context. These days youth sports socialize our athletic children with t-shirt slogans that account for none of the complexities of childhood (or adulthood for that matter). When we allow professionalizing commercial interests to dictate our youth training goals we’re completely missing opportunities to develop better people, and we’re putting kids at risk.

The irony of this is that adults are convinced that exposing children to the rigors of adult-style competitive situations is a great way to create elite athletes when the research shows that it’s a great way to ensure they quit sports. No, I’m not gonna cite sources here cuz there’s too goddamned many of them (but maybe start with Tom Farrey’s Game On).

Adults can continue yammering and harrumphing at each other about the problems in the youth sports system, or they can begin the difficult task of digging out the entrenched mindset that has so many kids thinking every game, meet, and tournament is a must-win situation. The vast majority of youth sporting events mean nothing. Nothing. There and gone and on to the next. Any glory adults contrive for the kids is fleeting. The doses only last so long and then you need another hit.

The Brand X Method wants young athletes to see the Gauntlet as a chance to spend a day doing something they enjoy. Working out and working hard, hanging with friends, meeting new ones. Nothing more and nothing less.

You want to take this shit seriously? Treat the Gauntlet as a periodic, formative test of capacity and skill; assess your kid’s performance and let it guide your programming; retest and repeat. Actually engage in the long-term enterprise of athletic and broader development and produce better people more likely to remain physically active and physically fit their entire lives and to pass that legacy down to their children.

The youth sports culture isn’t some unbridled thing that’s “out there” running rampant. We have the power and the responsibility to teach our children exactly what we want them to know about the purpose of competition and sports. 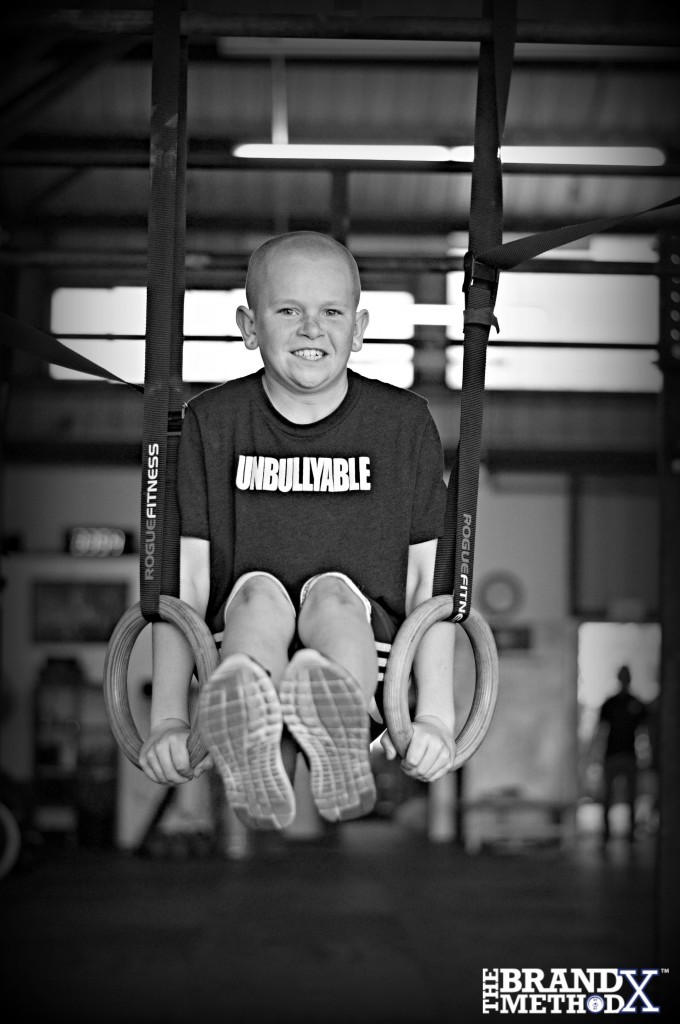