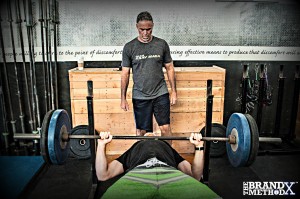 Last week, I discussed the Brand X Method™ and the Martin’s intention to offer continuing professional development opportunities to trainers and teachers via seminars and other services based on their many years of hands-on experience. A nice, straight exposition. This week, however, I need to explore something a bit more philosophical:

If a bear squats in the woods and doesn’t post a video, does he PR?

The impetus of this question is an ill-advised attempt to engage in what passes for contemporary public discourse by way of social media. As I mentioned in an earlier post, I was invited to join a Facebook group comprising masters-level CrossFitters (ages 40+). I’m not sure why I bothered, other than I’m not all that interesting so I think I was flattered that any group wanted me as a member…. except of course I ought to be leery of any group that wanted me as a member.

As I said before, the majority of posts were about injuries, which I ignored mostly because they’re above my pay grade. These are old farts, many of whom are longtime old-school athletes, all beat up, and some of their chronic conditions and injuries would make great case studies for an orthopedic surgery text. I stay out of it when one of them posts something about how her left knee fell off and she needs a sturdy sleeve before the next Open workout is announced. But there were other topics.

For example, there were various posts from respected CrossFit athletes. Meant to inform and inspire, those quickly became squirmy rectal suckfests. Having been born without a sycophant gene, I declined to participate. Other posts waded into treacherous waters such as CrossFit politics, nutrition, and Oly technique and were swamped with freewheeling, incendiary commentary so characteristic of our polarized civic culture. I tend to avoid those kinds of miles-long opinion orgies too because they start to resemble digital Towers of Babel where even valid points echo into oblivion down endless empty hallways of yammering self-involvement. Such anger and self-righteousness about meaningless shit, breathtakingly mean-spirited, ultimately void.

But every so often I’m overtaken by a treacly surge of sociability, and this one time I figured it would be safe to respond to some dude’s post asking for your heaviest shoulder press and highest unbroken set of strict handstand push-ups. Seemed harmless to me. He was looking for a correlation between the two. So I threw him some numbers along with my body weight, all kinda namby-pamby and affable and left it at that. I have a good press and decent handstand push-ups, so maybe this urge to connect was really me succumbing to a need for a pat on the back. That’s an embarrassing admission, but it happens. Nothing good ever comes from it.

The next comment came from a reasonably well-known CrossFit personality, a crowd favorite among the group. And he was all like, “That’s a pretty stout press for your body weight.” Just that, all deadpan and not namby-pamby in the least. And I’m looking at it, and I’m looking at it, and with a thunderbolt of insight I was all like, “He’s calling bullshit.” Because he’s one of the opinion leaders among the group, the tenor of the thread changed, and it was partially hijacked by incensed troll minions who discussed the necessity of providing video proof of one’s declarations, all indignant and shit. The gist being that if you can’t back your claims up with video, then you’re probably lying. And I was all like “Gee.”

The Indolence of Opinion

It never occurred to me that members of this esteemed masters group would lie about something as mundane as a barbell lift. What possible end could it serve to fabricate a number for a far-flung assemblage of total strangers you will never meet? We’re adults. We’re more than adults. We’re so advanced we call ourselves “masters.” Yet, apparently, some of us haven’t mastered the chittering, nibbling fear that our dicks might be tiny. When confronted by a mirror, we drown that sense of inadequacy by pissing piously on others with our eensy peckers. Seems to me.

Politicians, lawyers, marketing executives, broadcasters, murderers. I know, I know. Lotsa adults lie. But CrossFitters? To other CrossFitters? We’re all about real gains, real accomplishments. Check out the t-shirts and memes.

But then there’s the Open. Which some participants seem to look at as referring to the open interpretation of standards and the open dispensing of bro reps behind closed doors. And then there’s day-to-day gym time when rep cheaters find their form of fuzzy math a more efficient means of showing improvement than dealing with the hassle of putting in work.

So okay, people lie, cheat, and steal. But there’s something else about this need for video proof that has me thinking these sanctimonious wankers are simply full of it.

The CrossFit community worships a lot of heroes. Ayn Rand is one of them. I’m no Ayn Rand scholar (nor a fan really) but it strikes me that she might at least twitch a bit in her grave every time someone feels compelled to seek validation for his or her PRs by posting a video on social media. It’s called a personal record because it represents the fruits of your labor; it belongs to you and its value shouldn’t be determined by any collective observation of the achievement.

Consider all of those first muscle-ups executed during Open workout 15.3. All of those videos. All of that victory. I never had that magical moment. All eyes on and the epic Old-Man-and-the Sea battle to swing, jerk, and chicken-wing myself above the rings, the final drive skyward, legs pumping, spine bending into that arc de triomphe. Never had it. Know why? Because when I first heard about this mystical beast, I thought, “Really? How hard could it be?” Which, as we all know, usually doesn’t end well, but this time I grabbed the rings and—lo!—I did a set of three. Strict. No false grip. But guess what? The gym was basically empty. No cheering crowd. No Twitter. No Instagram. No video. So did it actually happen? And if not, what about the hundreds of unicorn-ups I’ve done since then? That’s a question best left to stoned sophomores, because here we’re exploring the issue of PRs in the woods, which is really about why you’re in the gym in the first place.

To get fit!
To improve myself!
To compete against myself!

Okay, but what about the rep cheaters? Why are they there sweating through select portions of a workout? We’ll need to explore that another time, but more to the point, what’s with all of the videos? Look, I don’t believe people who video their PR attempts are doing anything as lame and bizarre as rep cheaters. It’s not lame at all. It’s human. Sometimes we’re stoked about a PR. Sometimes we want constructive feedback—fixing our stuff, trying to get better. Sometimes we want any kind of feedback—just trying to feel better, to feel something. But when did it become a requirement to provide video proof to receive that pat on the back? When did it become necessary to obtain collective approval to validate something you accomplished for yourself (and your self)? Why are you paying this hard-earned pound of flesh to others?

Social media is a symbolic interactionist’s wet dream. We’re all engaged in a never-ending task of impression management such that reality becomes so contingent as to not matter (I wonder if the pre-digital-age sociologists who theorized on these ideas ever imagined the degree to which this social construction would eventually occur). My gym work is not contingent on anything but my own effort. I’ll continue to PR (or not) with no eyes or cameras on. I don’t need public approval to feel okay about my work. Because when my barbell falls in an empty gym and no fading CrossFit celebutante is there to hear it, it makes a huge SOUND.

“I swear by my life and my love of it that I will never live for the sake of another man, nor ask another man to live for mine.”

“You don’t have to see through the eyes of others, hold onto yours, stand on your own judgment…”